Shed closure due to coronavirus guidance

With regret, but in line with the latest government guidelines, the Carse of Gowrie Men's Shed will be closed for the foreseeable future. Any members wishing to collect personal items or finish urgent work should contact Nick Tindell (01382 783773 or 07530 947205) to arrange individual access.

Carse of Gowrie Mens Shed have donated a dolls house, complete with furniture, to Roxburgh House in Dundee.

The doll’s house had been kindly gifted to Carse of Gowrie Men’s Shed from a lady in Cupar and Shed members had been undertaking refurbishment recently. However Shed member Pat McCluskey, an out-patient at Roxburgh House, had mentioned to trustees that patients were looking for a project to undertake in the Autumn months.

Andrea Redpath, rehab assistant, at Roxburgh House was absolute delighted when the dolls house was delivered. She said, “ I thought that the doll’s house was simply for us to use as a template of sorts to build our own, but to be given the actual house and the furniture is amazing. Our patients are absolutely delighted and we have plans to fit carpets, curtains and more furniture”. She continued, “Once we have completed the project we’ll pass it on to the children’s ward at Ninewells Hospital to let the children enjoy it”.

Derek Keiller said, “ We are so happy to be in a position to support Roxburgh House especially when many children will be able to enjoy the completed doll’s house”. 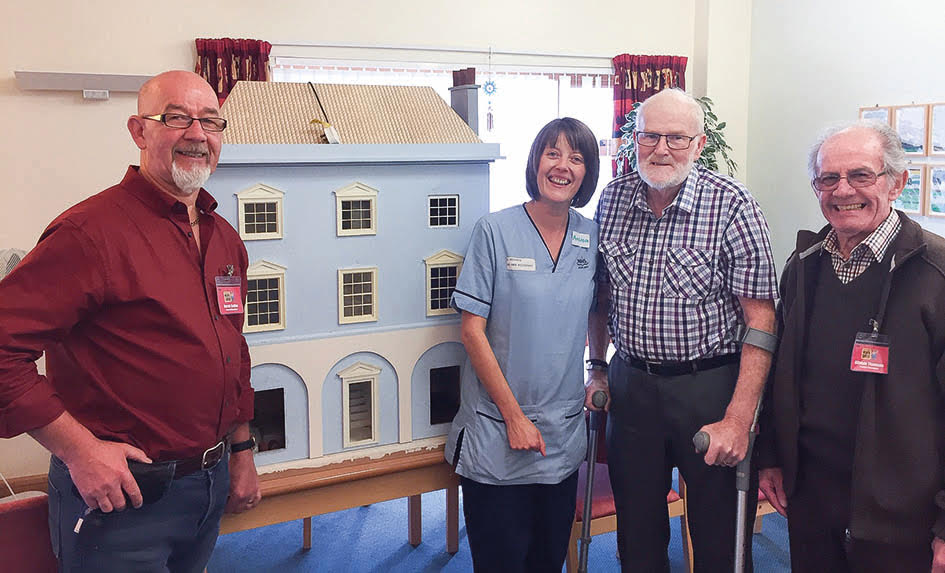 SHEDDERS FROM ALL OVER SCOTLAND GATHER IN DUNDEE

From Dumfries in the south to the Huntly in the north, members of Scottish Men’s Sheds gathered at Swan House on Dundee’s Technology Park for their AGM this week.

Launched in November 2015, the Scottish Men’s Shed Association aids the growing number of Men’s Sheds throughout Scotland with support, information and guidance to organisations and individuals who are already Shed members, or seeking to develop a Men’s Shed within their area.

A comprehensive and interactive 45 page website provides social media and contains the latest information on how to create a constitution, how to apply for charitable status and much more. The site also has it’s own You Tube channel.

There are currently 67 Men’s Sheds already in operation in the country with 45 in various stages of development.

During the AGM the 1,000th member was signed up.

Talks were given in the morning session by Alistair McKinley, head of Community Empowerment & Public Bodies Policy, the Scottish Government; Elaine McGhee, Greenwood Insurances Charity specialist; and Dr. Danielle Kelly, Lead Researcher SSD Glasgow Caledonia University who is to be carrying out research on the movement over the next 3 years.

Derek Keiller, Chairman of the SMSA  gave a talk on achievements during 2017 and plans for 2018.

Jason Schroeder, SMSA Executive Officer and the driving force behind the Men’s Shed movement in Scotland …………..

The Scottish Men’s Shed movement is gathering momentum so if you would like more information, to become a member, or start up your own Shed, visit ‘scottishmsa.org.uk’

Carse of Gowrie Men’s Shed had a visit from Stuart Martin from Australia. Stuart is a former resident from Dundee and emigrated to Australia in the 1960s but regularly visits Dundee. Jake Reid, procurement officer for the Men’s Shed, is a childhood friend of Stuart. When they met recently Jake mentioned that he was a member of the local Men’s Shed and arranged a visit. Stuart was so impressed with the facilities that he wrote a cheque for 2,000 Australian dollars and presented it to the shed. 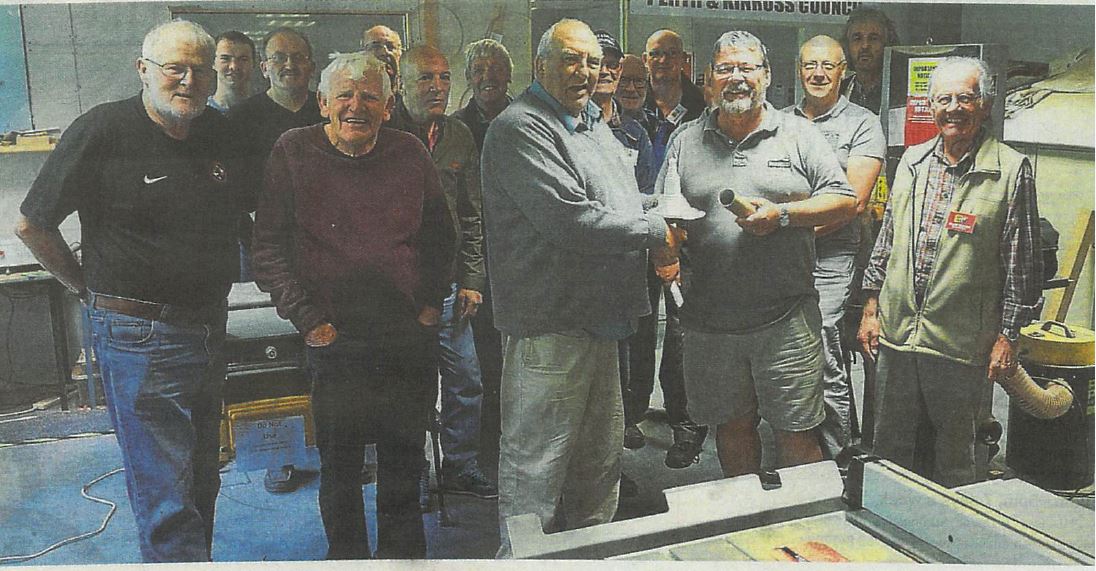 Carse of Gowrie Men’s Shed had a visitor from afar recently when Stuart Martin from Australia dropped in to see them.

Stuart operates an electrical business in Queenbeyan, just outside Canberra in New South Wales. A former resident of Dundee, he emigrated to Australia in the 1960’s but has never forgotten his roots and returns regularly to the city.

Jake Reid, procurement officer for the Men’s Shed, is a childhood friend of Stuarts and when they met up recently Jake mentioned that he was a member of the local Men’s Shed.

Stuart is familiar with the Men’s Shed concept as they originated in Australia in the 1990’s as a means to cater for ex -Vietnam veterans, men with time on their hands or retired men who just needed company and a place to go.

On visiting the Shed Stuart was so impressed with the facilities they provide that he wrote a cheque out for $2,000 Australian dollars and presented it to the Shed.

Carse of Gowrie Men’s Shed are currently base at Swan House, Technology Park Dundee but are moving shortly to The Circle, Staffa Place, Dundee.

Pictured are Stuart Martin (right) receiving an honourary membership of the Shed and a 3D printed copy of the Law monument from Jake Reid. 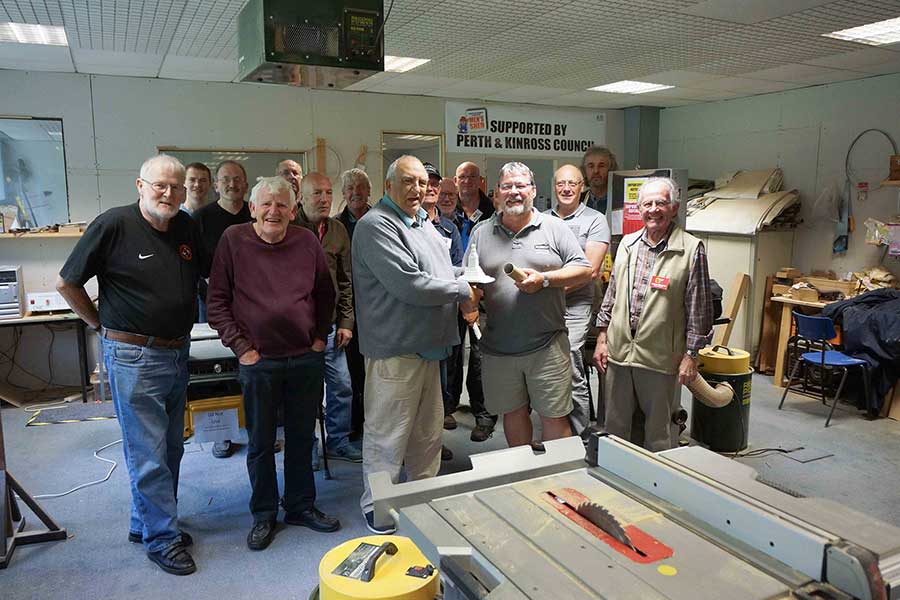 See the news item about mens sheds on the BBC web site.

The Shed Effect: The Impact of Mens Sheds in Scotland

Age Scotland will be sharing the results of their research into the impact of men’s sheds Dunoon on Tuesday 9th May and Dundee on Wednesday 10th May.

Age Scotland will be sharing the results of our research into the impact of men’s sheds. There will also be an opportunity to: 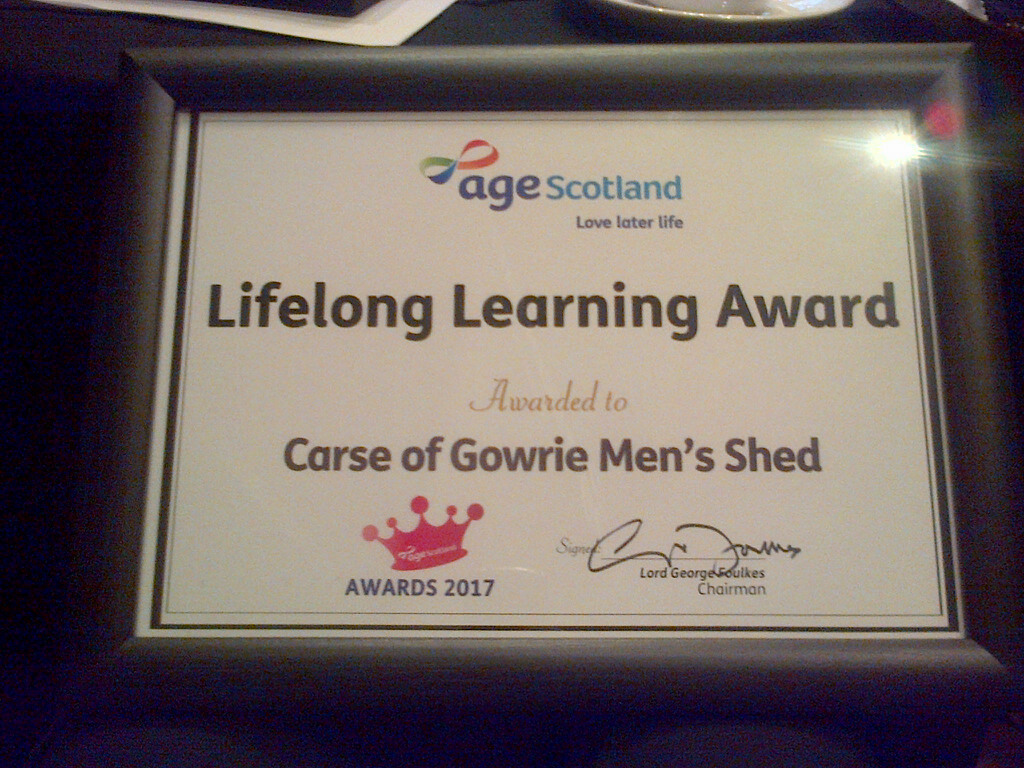